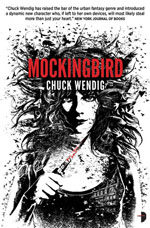 I teamed up with one of my favorite bloggers, Braine at TalkSupe to buddy review this book. Braine is a sexy librarian and is addicted to egg rolls/spring rolls, just like I am. The review will mainly be the same on both of our blogs, but we did add a little extra spice on our own pages.

I love how right off the gate Miriam is pissed and people started dying. I know it sounds morbid but that sets the theme of the book if not the series. Here I thought we're going to see Miriam living a quiet domestic life with Louis. So I was pretty surprised to read that their life is far from happy and in fact it has deteriorated since the events in Blackbird.

Call me a glutton for punishment, but I can't get enough of Miriam's in your face attitude and brutal honesty. The story quickly morphs from the day-to-day life of Miriam and lack of Louis, to the odd job that Louis finds her. He quickly dumps her at a school to go hang out with a woman he kind of knows. Was it just me, or was The Caldecott School an interesting choice of places to stick Miriam in? The purpose of the school is to reform bad girls, which describes Miriam perfectly.

I know, I feel like maybe Louis set her up or something sending her to that reform school. But Miriam has no rhyme or reason so of course she just goes along with it and find herself in another jam. I never expected a reform school to join the mix, this series is so morbid and such a horror story you know nothing good will come out of it when he adds teenagers to the cast of characters.

Miriam is still the crazy lady that I grew to love. She still cusses like a sailor and goes looking for trouble.

Still a chain-smoker and still drinks on an empty stomach! LOL

But there are minor changes that I noticed. She actually tries to change for Louis by wearing gloves so she doesn't see how people die. There is also the fact that she lies to a woman about how she dies because she doesn't want to upset her.

I never saw those gloves coming and I never expected her to be the "considerate" type. I know she still has a conscience somewhere. Remember how self-absorbed she was in Blackbirds? Maybe Louis softened her a bit.

I agree, I think Louis is probably the reason why her personality changed and she actually cares about a few people. Dare I say it, but there was even a slightly sweet side that was exposed.

My uh-oh moment was when she touched and saw Lauren Martin's death. I knew she'll  be Miriam's obsession and her quest to stop that vision from happening will set off a series of events that will turn this thriller into a horror story! But this only proves that Miriam's anti-hero complex is superficial, it's her inherent goodness that makes her go into superhero mode and tries to change people's fates. It might anger "the powers that be" but probably it's her way of giving the finger to this force that gave her this "gift". Plus seeing all those deaths is enough to drive anybody insane. No wonder Miriam is always teetering on the edge of insanity.

Wendig really stepped up the villain(s) in Mockingbird. The bad guy had no qualms on targeting teenage girls, which I think is why this book kind of shook me.
When the identities and back stories of the villains were revealed, I was so revolted by them. It reminded me of the movies Psycho and Wrong Turn. How can you reason with crazy?! Until now I still don't know how Miriam managed to get away from those people. That was a too tight of a situation and to say that she had another close call is an understatement.

Miriam seems to triumph in impossible situations, but even I doubted she would get away from the villains this time. They were really creepy and on more than one occasion I wanted to throw my nook in the freezer (like Joey from Friends) so the scariness wouldn’t get me.

Aside from fantasy books, I've never really encountered birds, supercharged birds, to be part of the character list much less a major one at that. I would sometimes see crows and ravens outside and while reading MOCKINGBIRD, I developed minor phobia about it. I'm a little superstitious and I have heard that a black bird's call heralds bad mojo but Chuck Wendig took it to another level!

I haven’t seen birds like this in anything before, so it really freaked me out when they talked. I’m not even going to think about the scene with Louis and the birds, that is the stuff of nightmares. One thing that I did not know, is that some ravens are actually able to talk.

After that video you showed me, the only black talking bird I know are mynah birds, I didn't know ravens/crows can too. In any case, I will never look at a black bird the same way again.

I hope you enjoyed our review! It was a lot of fun buddy reading and reviewing Mockingbird with Braine. Look for our interview with Miriam (via Chuck Wendig) in the near future.
Posted by LilyElement at 11:59 PM