It's already Tuesday! What books are you excited about this week?
Here are two that I am going to look into, and one that I have already reviewed. 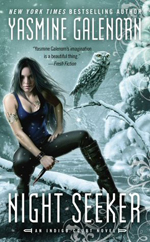 Eons ago, vampires tried to turn the dark Fae to harness their magic, only to create a demonic enemy more powerful than they could have imagined. Now, the Vampiric Fae are on the move, hunting anyone in their path. As the war with the vampires ratchets up, Myst, Queen of the Indigo Court, enshrouds New Forest in her chilling grasp.

Cicely Waters, owl shifter and Wind Witch, has rescued the Fae Prince Grieve at a great cost. Their reunion has lost them the allegiance of the Summer Queen — and the tolerance of the vampires. In desperation they turn to the Consortium for help. Now, to regain the good will of Lainule, they must dare to enter the heart of Myst's realm. But as Cicely and Grieve embark on their search for the heartstone of Summer, Winter is already wreaking her terrifying revenge.

Check out my review for Night Seeker HERE. 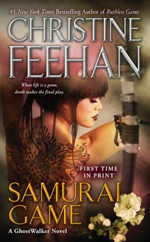 In an underground club, a high-ranking public official spends his secret nights indulging in fantasies as exciting as they are depraved. For a seductive employee of the Dungeon, it’s her job to fulfill them. But she’s playing a far more dangerous game—one of blackmail, politics, and murder that reaches into the shadow world of the Ghostwalkers, and the creation of a spectacular, one-of-a-kind new weapon of defense.

But when a dictator makes his own catastrophic moves, the Ghostwalkers have no choice but to bring in two major players—a man and woman both driven by passion and revenge. Both expendable. Both with nothing left to lose. 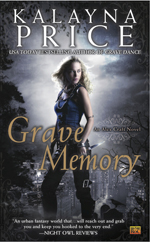 As a Grave Witch, Alex solves murders by raising the dead—an ability that comes at a cost, and after her last few cases, that cost is compounding. But her magic isn’t the only thing causing havoc in her life. While she’s always been on friendly terms with Death himself, things have recently become a whole lot more close and personal. Then there’s her sometime partner, agent Falin Andrews, who is under the glamour of the Winter Queen. To top everything off, her best friend has been forever changed by her time spent captive in Faerie.

But the personal takes a backseat to the professional when a mysterious suicide occurs in Nekros City and Alex is hired to investigate. The shade she raises has no memory of the days leading up to his brutal ending, so despite the very public apparent suicide, this is murder. But what kind of magic can overcome the human will to survive? And why does the shade lack the memory of his death? Searching for the answer might mean Alex won’t have a life to remember at all…