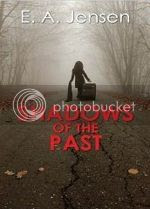 Title: Shadows of the Past
Author: E. A. Jensen

Author E. A. Jensen has released Shadows of the Past. Jensen's new horror urban fantasy work brings together an agent of the Vampire Council and a young New Jersey woman in order to solve a series of heinous murders whose victims are all protected under the Paranormal Laws.

Kirsa Heinrich has been trying to leave her troubled past behind for five years, but when her old boss calls her and tells her about a series of gruesome murders that have been occurring in her hometown, she knows the secret to solving them lies in her own past. A cryptic message for Kirsa has been left at the scene of each crime, triggering the buried moments of her own past.

Meanwhile, Ayden O'Brian, a member of an elite group of vampires who work for the Vampire Council, has been handed a case that hints at a traitor in their midst. Secrets have been being leaked to the vampires' greatest enemy, and when confidential information about Kirsa's family is passed on, Ayden is sent to New Jersey to help Kirsa solve the case she's already been working on.

Together the two of them unlock the long hidden secrets about Kirsa's family and an old war between vampires. In that strange past, they discover, lies the clue to the identity of the traitor and the person who has been responsible for the recent killings.
Posted by LilyElement at 12:00 AM