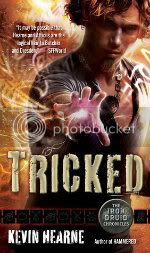 Tricked is rich with Native American mythology. The book revolves around Atticus and Coyote and a deal they made. In the beginning Coyote helps Atticus fake his death. In return Atticus has to do Coyote a favor. The favor quickly evolves into more that Atticus ever expected. But what can you expect when making a deal with the Trickester god? Skinwalkers enter the scene and everything becomes a lot more complicated.

Atticus O'Sullivan is a druid that has lived for two millennia. He is quick on his feet and very witty. I loved seeing references of Dr. Who, Terminator, and other random pieces of awesomeness. One of my favorite references is from Atticus's hound, Oberon talking about Flight Club.

This was an extremely easy read that I found hard to put down. Tricked had interesting characters, a plot full of twists and turns and tons of witty comments. I found myself giggling at some of the remarks that were made. I highly suggest this book if you like engaging male main characters that handle magic.
Posted by LilyElement at 1:00 AM