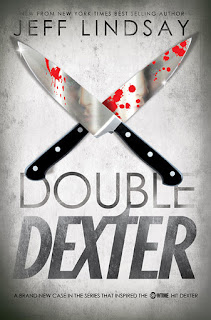 Amazon:
Dexter Morgan is not your average serial killer. He enjoys his day job as a blood spatter analyst for the Miami Police Department . . . but he lives for his nighttime hobby of hunting other killers. Dexter is therefore not pleased to discover that someone is shadowing him, observ­ing him, and copying his methods. Dexter is not one to tol­erate displeasure . . . in fact, he has a knack for extricating himself from trouble in his own pleasurable way.

My Review:
If you have not read the Dexter series but you do watch the TV show be prepared for major differences. The TV series took parts of Book 1, and then did its own thing for most of season 1. Book two and after are completely different from the TV series. So if you are looking for more Dexter, try out the books at your local library or if you are a risk taker, go buy them!

Double Dexter was by far not my favorite in this series, but it is not the worst. It felt pretty average and Dexter was whiny and put down his nephew a lot.
The ending felt a bit rushed to me, I believe it is because most of the book is building up of how Dexter is reacting to having a copy cat/stalker. It is pretty much the same drill as always though, Dexter kills someone, there is drama in the office, and there is drama in the family. It felt like 95% of the book was suspense leading up to the resolution. The last 20-ish pages were how Dexter resolves everything. Some of the parts in the book made me want to smack Dexter. It felt like he was oblivious to something so obvious that a child could understand it. Don't even get me started on how much I wanted to smack Rita. She could not utter a single full sentence. I don't remember her being that bad in the other books. I'm not sure when she became such an airhead but hopefully she will not be in the next book.
Posted by LilyElement at 10:50 AM